in Lord of the Flies and The Kitchen God's Wife

Lord of the Flies

Simon is a good example of self-sacrifice because he helps the other boys throughout the story, even though it costs him his time, his meat, and eventually, his life.

To begin with, he is the only one who helps with both hunting and building the shelters. On top of this, he also helps the littluns get fruit, when he could have been playing or relaxing like the other boys. This example portrays how self-sacrifice enables the progression of society.

Simon also is the one who gives Piggy his meat. He chooses the stop Jack’s cruelty towards Piggy, even though “The twins giggled and Simon lowered his face in shame” (Golding 74). Simon not only gave up his own meat, which even Ralph had not been able to resist, but also his respect from the hunters. This self-sacrifice doesn’t end up hurting Simon, however. Jack gives Simon more meat, and Ralph silently reflects on the moment, “his hands full of meat, saying nothing” (Golding 74). Ralph’s guilt serves to illustrates how the cost of self-sacrifice is outweighed by the good of preventing cruelty.

Simon’s last sacrifice is freeing the dead parachuter and going to tell the boys about it. Simon, like the other boys, is frightened out of his wits by the beast, but he is so desperate to save them from the beast that he perseveres towards it. When he understands what it is, he could have headed back down the mountain right then and explained what he had seen. However, he sacrifices the contents of his stomach to free the dead parachuter from the cords, preserving the parachuter’s last bit of dignity. By this time, Simon can barely walk from sacrificing so much of himself. And then the other boys kill him. Simon’s final sacrifice doesn’t pay off at all – the other boys never realise what the dead parachuter is, and the wind picks it up and makes it into a horrific flying monster.

Golding uses Simon to warn us that although self-sacrifice can do great good, it could also be futile. As a result, we have to choose how much we sacrifice, or we could end up like Simon.

In the novel The Kitchen God’s Wife by Amy Tan, Jimmy Louie, an American translator, sacrifices it all in order to help the women that he loves escape from her abusive marriage.

An example of Jimmy’s sacrifices towards Winnie’s and his relationship is the fact that even when Winnie told Jimmy of her past he still wanted to be with her. Knowing full well of what Wen-Fu had done and what he was capable of Jimmy is still willing to sacrifice everything in order to be with Winnie. By writing letters and sending money Jimmy is solidifying the fact that he is willing to do anything and everything that the can in order to help Winnie. This was also after Wen-Fu had Jimmy sent back to the United States.

Another good example of self-sacrifice is when Winnie is put into jail Jimmy writes her everyday telling her that he will wait for her. This illustrates the idea that Jimmy is willing to sacrifice his own life and future for Winnie. This example is portrayed by Jimmy’s actions and how “[He] told everyone, even strangers on a boat, that he was my husband, I was his wife” (Tan 376). Jimmy Louie telling everyone that Winnie was his wife conveys his devotion to Winnie and the fact that he would always be there waiting for her no matter how long it took.

Through these important events that changes Winnie’s life we can see Amy Tan’s stance on self-sacrifice. Tan’s message is that self-sacrifice will ultimately be worth it, she uses the heroic character of Jimmy Louie to show that if you are willing to risk it all everything might just pay off for the better.

Amy Tan and William Golding have very different messages that can be clearly seen through the messages in their books The Kitchen’s God Wife and The Lord of the Flies. In the novel The Kitchen God’s Wife Tan’s message, that self-sacrifice will pay off in the end, is portrayed by the countless examples of sacrifice shown by the many heroic characters in the story. In the novel, the characters Winnie and Jimmy Louie achieve their happy ending through their sacrifices. However, Golding’s view on sacrifice is much different; the only character who was selfless enough to sacrifice his life, Simon, ended up dying. Golding views on the human soul is that humans are naturally evil and that self-sacrifice ultimately isn’t worth it. 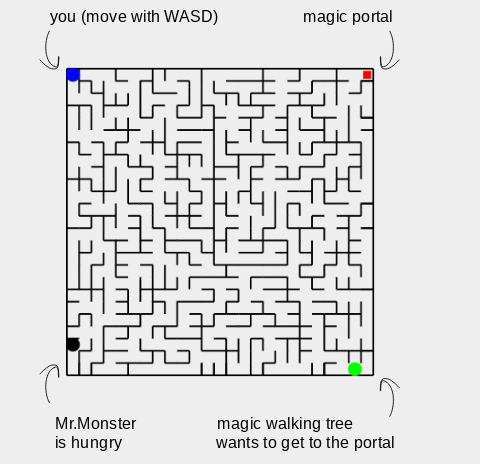 
The game was supposed to show the tradeoff of self-secrifice. In the game, the player has a few options: cry in the corner, rush to get to the portal themselves, or deliberately lure Mr.Monster towards themself to save the magic walking tree. The third option is usually the only way to "win" to game.

In the end, it's the player's decision - to be like Simon, or to fend for themself.


Not impressed with this website? You might be, if you knew that I coded the entire website, from scratch, using HTML5, CSS, and JQuery. You can press CTRL+U and see for yourself - the website is about 200 lines of code, all done in about a week.

I also coded the maze game, using just Javascript. You can see the source code here.

Want to learn how to code? Join Coding Club on Thursdays at lunch for instruction and resources on HTML, CSS, Java, Javascript, Python, and more!